so i apologize in advance for the length and emotional roller coaster and kind of winding process this post is bound to take. i am using this writing to process this entire ride and am hoping for things to come to light that might not have initially.

so based on the temperature we decided to start the ride at 10:00 am on saturday. as we all started getting dressed and filling tires and putting bottles onto the bikes, i was getting more and more nervous. i hadn’t been nervous in the days leading up to lake placid but after my run the night before i was very VERY nervous about the temperature. not the ride or the miles but about the cold. everyone agreed that we would all be mindful of the temperature and our bodies as the day progressed. sandy was our sherpa and would be meeting us around the course. my mind was a bit eased but still i was nervous. and that nervousness was manifesting in tears.

but off we went. and we went into town and around the school and down the hills through the neighborhood. definitely was uncomfortable in that area and thinking of starting my ride with a bunch of other folks all wound up makes me know that i need to be alert and ready in that area. then we turned and set out. i felt comfortable on the bike in terms of my body but felt very unbalanced. i mean, it was only my second time out on this bike, so it’s not surprising. and we climbed. the hills weren’t awful but they required focus and attention. we finally hit the big hill and as sunshine and i crested the hill she said “oh yeah that’s how we make hills our bitch.” which is always a funny thing to hear her say such things. i was smiling yet my brain was on edge. i knew i wasn’t really fueling due to my unbalanced nervousness. so i tried to slow it all down and focus. i got my bottles out and drank. got some food out and ate. 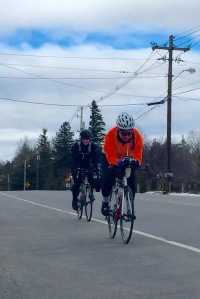 and then we began to descend. we were heading towards keene. the first descent was unnerving but not completely terrifying. i just kept talking to myself (out loud) reminding myself that i could do this, that i’ve done worse and been through worse. we all regrouped before the major descent.

and then. it came. the big scary descent. i knew it was downhill. i knew the road wasn’t great. but nothing, nothing could prepare me for what the actuality of that descent really is. jas came by me and said “let it go” which immediately set me into emotions, then fiona asked so politely with her sweet british accent if she could go by and i gladly told her yes! and then i began to go down that hill. honestly. it was scary. actually scary is what other hills i’ve done are. this was terrifying. i was holding my brakes a bit, not completely because i was scared i would flip or that the brakes would make the bike fall apart (insanity). and i was yelling. yelling at the world. yelling at myself. yelling at everything. i was cursing. i was crying. i was trying to give myself a pep talk. i was doing it. and i did it. we got to the bottom and again we regrouped. i fueled up but was cold.

and jas and i set off towards jay. this was a lovely area. i was able to get down into aero, although i was still feeling unbalanced. jas was talking me through the bike usage. reminding me to relax, to make circles. how to shift a bit. he was giving me tips for the course. it was perfect. he was also forcing me to express. i believe there was some conference that occurred in regards to my mental state before we set off and the decision that was made was that he would talk me through this. i was not in a bad mental state, i was scared of the downhill but ready to continue. as we rode i fueled and tried to stay in aero as much as possible. 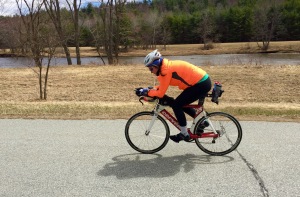 and the scenery was gorgeous. my brain was relaxing. my legs felt good. my feet were definitely cold. my toes at this point were numb but the rest of me felt good so i figured it would pass. the sun was coming out. things were looking up. jas kept reminding me to fuel and i was getting frustrated with his reminders. i felt like i was fueling properly.

we got to the turnaround and he told me that he felt this part of the out and back (the back part) sucked – so i mentally began to be ready for that suck. but it wasn’t bad it was just slightly more incline than the out but still beautiful. then we turned – up. up the hill. it was quite a turn and quite a hill. i heard walter and his bell. i heard walter tell me to relax, to become the bike. then jas came back down the hill with his phone and had found a bell sound and was ringing it to remind me. i was beginning to go into my head. jas knew it and kept talking, helping me with the strategy of riding a hill.

this is us finishing that first hill. i felt pretty pleased with myself and my brain had lightened up. but then the wind began to pick up. i was noticing that my toe pads were also numb. i was trying to fuel but my hands were bugging me and the wind was strong. i felt like each downhill was cheated by the wind. i was beginning to go into my hole and then the whole world opened up. 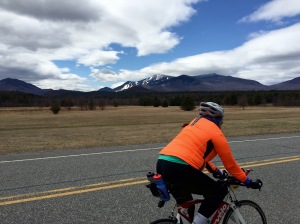 and it took my breath away completely. i wanted to stop and take pictures but i saw jas doing so and i also knew that if i got off the bike, i might not get back on. and we rode.

we went into another out and back and it began to click with me that the out and backs are vital to my fueling. jas was reminding me to fuel and i was trying to ingest as much as i could. we arrived to an area where the road was closed. jas said that we would take the detour and figure it out. this began to get me nervous. i didn’t voice it but i was nervous that we would go far out and not be able to get back. i was also nervous that we were missing something important i needed for my brain. and this nervousness began to compound. i began to spiral in my brain. my hands hurt and i couldn’t get comfortable in the aero position and my feet were getting progressively more numb. i could barely stay focused my brain was like a pinball machine. i tried to focus on my breath to create my space and peace.

we turned to go towards home. i saw the ski jumps and felt an excitement that i was actually almost done. my brain was still jumping around and then i couldn’t do circles with my feet and legs. we were climbing and i couldn’t feel my feet anymore at all. this totally freaked me out. i tried to keep climbing but i couldn’t. i yelled to jas that i needed to stop and we pulled over but i couldn’t unclip. jas held me up and talked me through unclipping and getting off the bike. i was a mess. i couldn’t get my words out and my feet weren’t there. jas was calm and told me to hydrate and eat. he was trying to get me back on the bike without pushing me too hard. he said to me, “we are only 7 miles away” and i knew we were close and this made me sad. my brain was still pin balling and i was trying to figure out quickly if i could get back on my bike and safely make it up the never-ending uphill? or was i giving up too easily? or were my feet numb and this was the safest decision i could be making?

this i knew. and this was also difficult to know what the reality of this situation was. i couldn’t feel my feet and i knew this was hard so maybe my brain was fucking with me again. i didn’t know then and i still don’t know now honestly.

jas called sandy once and she didn’t pick up. he called again and she picked up. it seemed like an eternity and i kept struggling with this decision. i didn’t want to be defeated and my feet were numb. could i continue? should i continue?

sandy and fiona showed up and got my bike on the car. it was embarrassing, heart wrenching and disappointing. i was mortified to return to the house and face coach k. i didn’t know how i would explain to anyone how i failed to finish.

i went to my room and called s. i was hysterical. i was so disappointed. i was furious with myself. my feet were still so cold. as i laid there after getting off the phone i knew that this couldn’t be the end. i had worked too hard. i knew that this ride would be hard but i did not foresee stopping.

i left the room and went to the bathroom and saw coach k. she was pissed and disappointed. i’m not sure what was worse for me – the disappointment i felt in myself or her face.

** I definitely didn’t fuel properly and have learned from this mistake.

*** I’m still not entirely sure if the cold feet or my brain beat me that day.